The most commonly sighted cetacean species off the coast of Tenerife is the short-finned pilot whale. Pilot Whales are actually a species of dolphin, and range in size, with males usually being around 5.5 meters and females 3.7 meters. They are very social animals, and stick in pods with typically 10-20 individuals.

On whale watching tours, tourists generally have several interactions with groups of pilot whales, which can last up to 15 minutes. The boat captains are specially trained to navigate appropriately around the pods, so that tourists get a good view but the whales are also protected. Boats with captains who have special whale watching certifications have a special flag to denote their qualification. 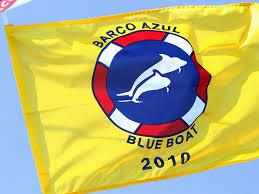 Over the years at AWF, our volunteers have collected fin shots and behavioural data on several of the pilot whales, whom we’ve identified through photographs over the years. The whales are identified by the shape of their dorsal fin as well as any notches or marks in the fin, either from fighting other whales or boat impact.

The pilot whales seen on the tours off Tenerife are friendly and curious animals. Often they are seen diving and surfacing near the boats, swimming in the waves made by the boat and checking the tourists out with behaviours such as spy-hopping (pictured above).

These creatures are truly incredible to encounter in their natural habitats, and in Tenerife, tourists are especially lucky because they generally will see many during a boat tour of just a few hours.