When I volunteered for a couple of weeks at the Atlantic Whale and Dolphin Foundation  in the Canary Islands , I was excited to find out I could get involved with lots of local charities on the island of Tenerife – including spending time at a local dog shelter. I made the decision to spend some time on this beautiful island volunteering between placements as a first year student veterinary nurse.

During my time with the AWDF I learnt about the resident whales and dolphins, helped conduct and collect research out on the whale watching boats, joined campaigns against the captive dolphins at some of the biggest parks on the island and walked , groomed and helped with re homing of the local shelter dogs.

The Atlantic Whale and Dolphin Foundation (AWdF) , is a UK Registered charity. It was founded to continue the work of Spanish environmental agency, Proyecto Ambiental Tenerife, some twenty years ago and runs the volunteer programme on the island’s whale watching boats, one of the largest whale watching centres in the world.  The AWdF runs cetacean educational awareness, research and conservation programmes. Its volunteers act as ‘Research Guides’ on the whale watching boats. The AWdF also works with the tourism industry in Tenerife, promoting cetacean conservation and promoting responsible whale watching and other eco-tourism opportunities on the island and works with local charities and animal shelters.

When I was changing placements I desperately wanted to use the two week gap gaining some experience in a different part of the world, I wanted to use some of my student veterinary nurse skills in this but also wanted to experience something completely different to anything I had before. After weeks of searching I came across the AWDF website online and within half an hour of being inspired by their campaign I had booked a volunteering placement and flights to Tenerife. 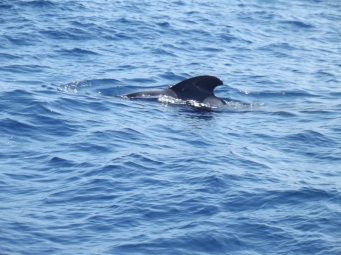 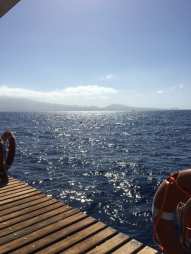 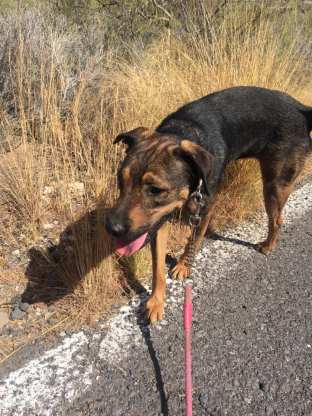 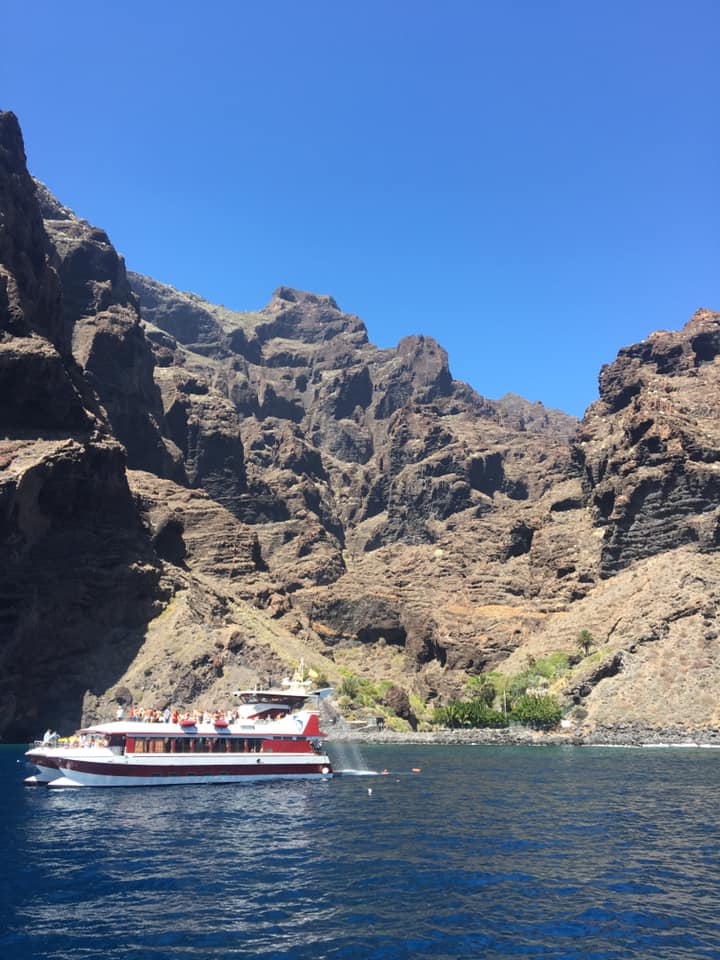 As the plane was coming in to land at Tenerife South Airport I could see a sheet of blue ocean below us and a range of tall mountains in the distance with the sun creeping down behind them.  I was feeling exited and eager to get off the plane, one of the co-coordinators was waiting to take me back to headquarters to meet the rest of the team.  Lots of things were running through my head but I couldn’t stop thinking about the sheer size of the ocean below us, the creatures that inhabit it and the exiting time I had ahead working with them.

After driving up the windy roads of Arona we arrived at AWDF headquarters in the hills, known to the locals as “The Dolphin House”. The buildings were old, rustic and beautiful with a giant dolphin sculpture looking over the sea. I was shown to my room in the “back apartment” where I met my new roommates – who were also exited as it was their first day too!  I dumped my bag on the bed (bunk beds – think hostel not hotel) and headed into the main building for a tour. Everyone I met on this amazing journey was from all areas of the globe , it was amazing listening to everyone’s stories and backgrounds – we all have one thing in common , we love animals and were brought together to help them and the planet by this amazing foundation.

Over the weeks I learned about the different resident species of whale, dolphins and sharks on the island, how to track their co-ordinates, their behavior and how to take fin shots (this is how they identify the different families – called pods). The experienced volunteers could tell them all apart by the shape of their dorsal fin! The aim was to collect data to monitor their movements, their population and to see if the human traffic on the oceans were affecting them.

Going out on the boats was so exciting for me, I loved being out on the ocean and I can’t describe the ecstatic feeling that I felt when I saw my first bottlenose dolphin in its natural habitat; they were so playful with the boats! I saw Atlantic spotted dolphins, pilot whales, sea turtles and even a hammer head shark. We would spend each day, all day on the boats filling out data sheets of our encounters and taking fin shots to uploads on the data base back at the dolphin house. The AWDF also have a petition to try to ban single use plastic, so at the end of each trip we would collect signatures off the different tourists from around the world.  The majority of marine waste is single use plastic pollution, combines of lots of different household wastes from humans.  The AWDF organize beach cleanup campaigns around the island to collect and correctly recycle single use plastic and waste on the shores – I was lucky enough to get involved with one of these while I was volunteering with them.

When signing up to volunteer with the AWDF they encourage you to conduct a personal project to help the foundation. I decided to write a day to day blog to post to my peers on social media to highlight the work and encourage others to volunteer, as well as offering to help at the local dog shelter in Arona, the local village. The shelter was really close by the house so one of the coordinators would drop us of there for a few hours. The set up was high in the hills, housing around 30 dogs – all handed in as strays on the island. They would be vet checked, trained and re-homed if they were all signed off. They also had a cattery with some cats and kittens. There was lots of volunteers every day, sometimes the dogs would have already had two or three walks through the hills so we could spend time in the kennels grooming or keeping them company, the volunteers would sometimes be tourists with a love of dogs who just wanted to help , or locals who had been there for years.  When walking the dogs we would go in pairs with a dog each, usually I would choose my favorite dog to walk – Scar, a large cross breed with the biggest eyes and the waggiest tail.  We would walk them on a designated route up the sandy hills with water stops on the way. The re homing of the dogs was fairly difficult for the shelter however sometimes external charities aboard would re home them with some even coming to live with new families in the UK!

The  AWDF also encourage  volunteers to take part in other activities whilst with them such as surfing , diving , snorkeling , horse riding and hiking the third highest volcano in the world (El Teide).

I absolutely loved this experience and will definitely be returning whenever I next can, it has sparked a further love for traveling and learning for me. I believe this volunteering journey really helped inspire me as a student nurse because it opened my eyes to all the opportunities we gain from this journey. Understanding that learning about any animal is beneficial and knowing how important it is to look after our planet and everything living on it, as well as experiencing different cultures.

The main thing I learnt is how important it is to meet like minded people, from anywhere in the world and let them inspire you to be the best person, and student veterinary nurse, that you can possibly be!

Lucy: Why I Came Back 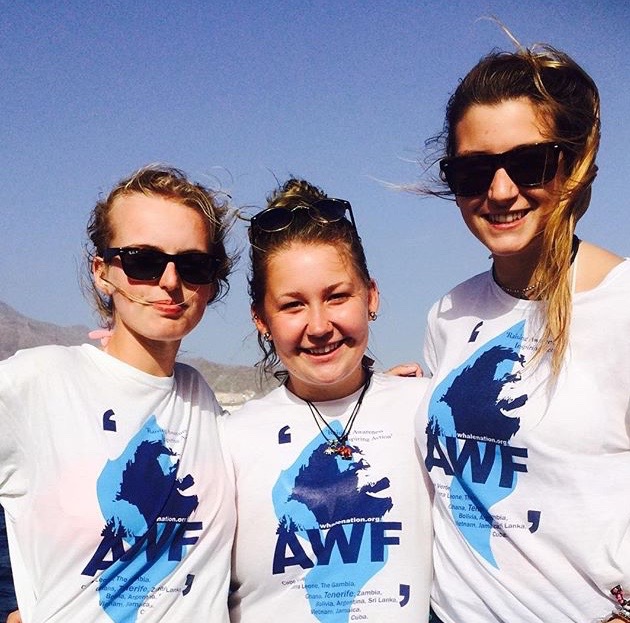 This weeks volunteer story comes from Lucy, a returning volunteer!

Why I Came Back

My first trip to Tenerife with the Atlantic Whale Foundation was with college in 2015. I studied travel and tourism and had a large interest for ecotourism and conservation tourism, so this was the perfect place to come and experience. At first I didn’t know what to expect or what it was going to be like. I was already arriving with a large group of college friends so my nerves were calmed. However, when I arrived I knew I had nothing to worry about, and everyone welcomed us with open arms.

During my two week stay, I was able to see different species throughout my time, such as Bottlenose Dolphins, short-fin pilot whales, Bryde’s whales, Atlantic Spotted Dolphin and even flying fish.

There are many reasons I decided to come back; the people are so nice and welcoming you feel at home right away, so I didn’t have to worry about arriving after everyone else. The people we met became friends for life, even if I only met them a few days before leaving.

At AWF, you learn so many new things, and are able to do many new and exciting things you couldn’t normally do anywhere else (such as diving, snorkelling with turtles, parasailing, surfing, kayaking, jumping off boats to swim in the ocean, camping and so much more). This helps improve things like CV’s, skills, and experiences, as well as letting you realise what you are really good at, as well as discovering new interests you may not have had before.

In 2015 I stayed with AWF for two weeks, and now I am here for four. With my time I plan to complete an open water diving certification, and hopefully see and experience even more. This experience is a one in a million, and it has allowed me to learn new things, not only about marine conservation and endangered species but also new things about myself and what I am capable of.

Lisanne: Why I Chose Volunteering with AWF

This weeks story brought to you by our lovely Dutch volunteer, Lisanne!

I was also looking for a long holiday in a warm place! I wanted to combine my holiday with volunteering work, but unfortunately, most volunteering work quickly gets very expensive. I found AWF just by googling and was surprised by the projects they offered and the low costs. I also really liked that it is an organisation with many students and that they organize many trips in Tenerife, such as visiting Santa Cruz and snorkelling. I felt it was everything I was looking for!

One week at Tenerife and it is still everything I was looking for 🙂 So far, I have been on the boats (with very nice crew and food), went snorkelling with the turtles at Turtle Bay, went diving for the first time (very exciting!), had much fun in the water park Siam Park and relaxed on the beach of Los Cristianos. While being on the boats, I have already spotted numerous bottlenose dolphins and short-finned pilot whales, but was also lucky enough to see common dolphins, atlantic spotted dolphins, flying fish and even a Bryde’s whale! There are many people at the AWF house and that is really nice, because there is always someone you can talk to and go with on trips to explore the island. I would definitely recommend volunteering at AWF and I am excited for the rest of my stay at Tenerife!